Residents of Makhanda (Grahamstown) Municipality are dumping their rubbish in the streets and claim that they havent seen a municipal rubbish truck in years.

Parts of Makhanda are drowning in a flood of uncollected rubbish, with flies swarming over babies’ nappies, adult diapers, and dead animals in illegal dumpsites.

The municipality says rubbish is collected regularly, but families in areas GroundUp  visited said they hadn’t seen a municipal rubbish truck for a while.

GroundUp visited areas like Phumlani, Fingo Village, Extension 9 and Joza , where residents took us around the illegal dumping sites which they say are becoming an uncontrollable problem. In some places vegetation and long grass showed that the dumping sites have been there a long time.

Mvikeli Saki in Fingo Village showed us a dumping site right next to homes. “We are breathing this filthy stench from these dumping sites. The garbage in the area has caused smells and rats that come inside our homes. I can’t recall the last time I saw the municipal rubbish truck.

If the municipality was serious about fighting illegal dumping they would intensify the collection of rubbish across. People just find a spot and throw rubbish. Because if you hang a bag on your gate and wait for the municipal truck to collect, dogs, donkeys and dogs will tear up that rubbish and scatter it around,” said Saki.

In Extension 9, resident Eric Matyobeni, said the municipality used to distribute black refuse bags to every household in Makhanda.

“I don’t know what happened but that stopped years ago. Every week, on the day the truck came to collect rubbish they used to distribute the refuse bags. That was done regularly and illegal dumping sites were not like this.

We are buying the black refuse plastic bags on our own now. Those who can’t afford end up throwing their rubbish in these illegal dumping sites,” said Matyobeni. 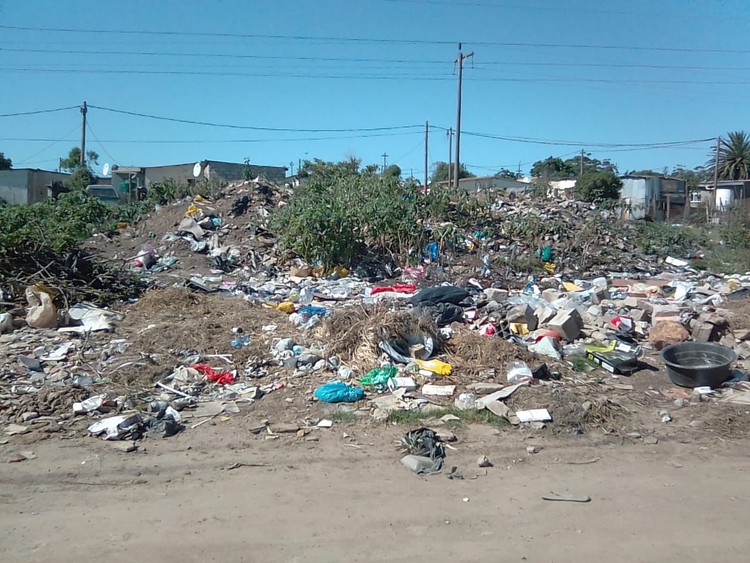 This is an illegal dumping site in Phumlani location and residents feel unsafe from thugs because of it. Photo: Loyiso Dyongman

Joza resident Sizeka Mantshongo said several streets in the area were littered with garbage and open field were covered with dumped rubble.

“The municipality fails to collect refuse regularly and animals help themselves and scatter the rubbish. In the past few weeks business people have cleaned up another illegal dumping site next to Samuel Ntlebi and CM Vellem Primary Schools. We are living a very sad life including the unstoppable sewage running in the streets,” said Mantshongo.

He didn’t answer question of what causes these illegal dumping sites, but he said it was “not true” that the municipality did not collect rubbish regularly. Each area knows its day for collection,” he said. “The municipality collects refuse weekly.”

GroundUp visited Luvuyo location in Fingo Village on Wednesday and there was no municipal truck collecting rubbish. Residents said years back the truck used to come on Wednesdays twice a month.

In Joza GroundUp did see the truck, but resident Zintle Bunyonyo said households did not receive refuse bags. “I can’t remember when we last received the refuse bags but it’s years ago,” said Bunyonyo.

In Kwamnqayi, residents said rubbish used to be collected on Thursdays but was no longer being collected. There was no sign of a truck when GroundUp visited. In Zolani Location, residents also said refuse was not collected and no refuse bags were distributed. 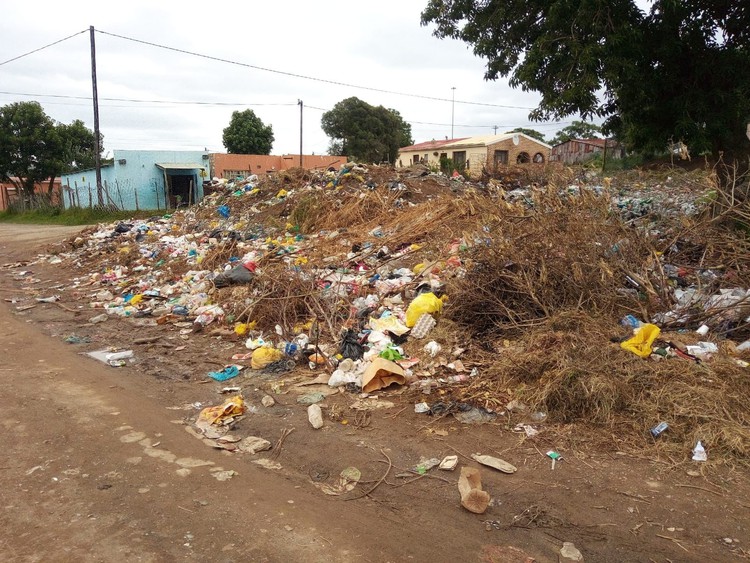 An illegal dumping site in Luvuyo Location in Fingo is right next to houses. Photo: Loyiso Dyongman