Tourists in the former Transkei have been the victims of violence during a service delivery protest for a better road at Magusheni.

Poor service delivery has caused local communities in the former Transkei to take out their frustrations on tourists. The state of the R 61 road between Magusheni and Fort Donald in the former Transkei has led to violence as angry mobs have blocked the route to Kokstad, making driving impossible and dangerous. 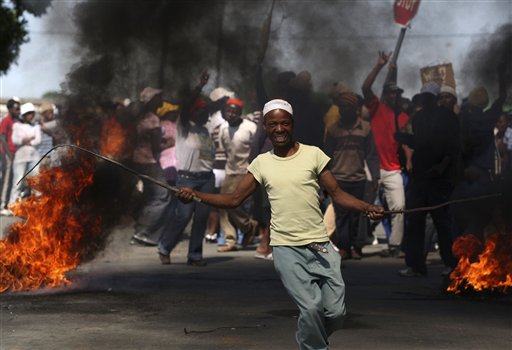 Pine Pienaar, the DA’s shadow minister for Roads and Public Works said “On Monday, 21 May, I was informed of three incidents where tourists had to turn back or had their car window smashed. The police in Kokstad confirmed that there had been “a couple” of similar incidents”.

In the words of one tourist, Mrs. Phillida Ellis, “we came across an angry and very aggressive crowd of people and were warned to turn back by a motorist who had tried to drive through and had been threatened. The protestors told him they were demonstrating because they did not have a tarred road”.

Later, on the way to Kokstad near Fort Donald, Mrs. Ellis and her husband came across a broken down car and a man desperately trying to flag down motorists. It was a German tourist couple, Dr. Herbert Plum and his wife, who had encountered the demonstrators and had their hire car’s window smashed with rocks and batons. They had been forced off the road through the veld and in doing so had damaged the underside of the car which ground to a halt at Ford Donald.

Mrs. Plum was severely traumatised and could not stop crying. While they were there tourists from Gauteng also stopped. They had the front window of their Toyota Fortuner shattered.

People are unhappy with a lack of service delivery and because the government does not listen to their needs. “The DA believes that excellent service delivery is critical in ensuring that our citizens and visitors to our country can enjoy an environment that is safe and which allows for the opportunity for a better life”, added Pienaar. Kenya Wildlife Service has reopened the gorges at Hells Gate National Park, two months after they were closed following a…